In the introduction to my forthcoming book (see note 1), I muse briefly on how similar Havana (my adopted city) is to New York (my birth city): the garbage and grit; taxi drivers with higher degrees; the self-contained neighborhoods – it all feels very familiar. Another characteristic both cities share is they teem with subcultures worthy of an urban anthropologist. Poets and punks, gym rats and drunks, shylocks, gamblers, sluts and thieves: here, like there, we’ve got the full spectrum of human passions, vice and interest crashing together like waves on the Malecón.

This past weekend, I was (gratefully, willingly) thrust into one of Cuba’s most prismatic and emblematic subcultures and scenes: I rode along on the country’s first Harley rally. For the record: the trip from Havana to Varadero was only the third time I’ve been on a Harley in my life. The first was a joy ride in what was clearly foreplay and a bid to get something more corporeal between my legs than a thundering motor (in this the fella failed, for which I’m thankful: at that destructively drunken point in my life, the last thing I needed was to hook up with a biker bartender). The second was a thoroughly platonic and enjoyable ride home from the year-end party in Habana campo hosted by the Latin American Motorcycle Association (LAMA) and the third time was this past weekend, when over 50 riders made their way to Varadero on pre-1960 bikes from as far as Pinar del Río and Camagüey for three days in hog heaven.

As you may imagine, my muse was working overtime in this new and captivating environment, populated by cool people with their own language and subtext. Since everything I know about biker culture I learned from Easy Rider and Altamont, I was keen to experience the 1ro Encuentro Nacional de Harlistas Cubanos firsthand.

And I wasn’t disappointed. Al contrario: I was inspired and surprised. Because although as a group these folks cultivate and maintain an identity wholly dedicated to, nay obsessed with, Harley Davidson, they remain, al fondo, 100% Cubano.

If you know Cuba from the inside, you know this subculture phenomenon – be it goth, gay, or black – hasn’t always fit in well or properly with the macro unity concept that is the glue for us here in one of the world’s last bastions of socialism. Of course, when there’s USAID or other sovereignty-compromising dollars in the middle, peor todavía. Worse still with reason since I believe all human relations should be driven by mutual respect, regardless if it’s in the realm of sex, economics, culture or politics. In short: you don’t tell me how to live, work or play and I’ll return the favor.

What was even more striking still was that on the whole, these Cuban bikers are more closely connected to their global counterparts and importantly, their US brethren, than any other community I’ve encountered here (see note 2). As a group, they speak (almost) as much English as the slickest jineteros and what’s more, the main biker groups here – LAMA and Harlistas Cubanos – have foreign membership, long timers like me who live here and love bikes. And the mix works seamlessly because beyond the bikes, gear, and foreign presence, what grounds and unites these folks is their Cubanilla, with all the idiosyncrasies good and bad that implies.

Even before we rumbled out of Guanabacoa towards Varadero, the gossip was flying. And believe me: these Harley folks are more chismoso than a kitchenful of bored housewives. I learned all about Antonio’s marital strife; the petty divisions and squabbles among different riders and groups; and how Vladimir got his hog and Oscar lost his. Thanks to the gossip mill, I was privy to the anonymous alcoholic’s struggles and how much Fulano paid for the silicon tits and ass of his funny, sexy, back seat Betty. The grapevine was heavy with juicy fruit, but what impressed me the most was the handful of folks who didn’t gossip. Those are the ones to ponder further, I figure – above all because I abhor gossip as an entirely negative pursuit. With the anti-chismosos, I’d found my people (see note 3).

What also struck me as totally Cubano was the fury for everything with the Harley Davidson logo. I know brand loyalty is common to riders the world over, but Cubans can go overboard like nobody’s business – especially when it comes to logos and bling. And this was no different: there were boots, belts, shirts, jackets and vests, jewelry, headbands, bandanas, flags, stickers, and business cards all emblazoned with the Harley label. Boy, did I ever look out of place with my Hawaii-kine style, particularly when everyone was throwing devil horns and I’m waving the shaka. But while I may have looked out of place, not for a moment did I feel out of place – another sign you’re hanging with Cubans. 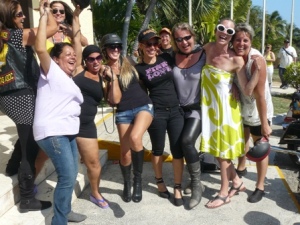 If you know this place and manage well in Spanish, you know that there is no one who can make and appreciate a good joke like Cubans – especially when the joke’s on you. And these bikers are tremendous jokers – jodedores constantly dando cuero. No one is spared, least of all me, and these Harlistas ribbed me good-naturedly at every opportunity: about how I leaned into curves (not that well, apparently; ¡que pena!); about my addiction to roasted pork (see note 4); and my penchant for hopping on the back of anyone’s motorcycle, anytime. I’m sure they have words in biker parlance for promiscuous back seat bitches like I was this weekend, but in my case, it ended with a forged love note that had everyone busting a gut. But at least I fared better than another foreigner who had his gold chain vicked by a muchacha ‘fren’ giving him a massage; he never heard the end of it.

But what most drove home the Cubanilla for me was that bedrock Cuban principle driving relations on-island and off which these folks have in spades: what matters above all else is family. Blood, extended, new and departed. And it wasn’t only the adorable kids along for the ride (many in mini Harley gear), but how you know your back is covered when someone falls ill or that someone will lend a hand when you need a new part, mechanic, or lover and an ear when you’re down. As a group, the Harlistas Cubanos function as one big, complicated – dysfunctional at times, but happy all the same – family. United by their love for their bikes, the road, and their patria. 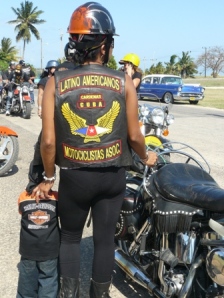 It’s a weekend I’m sure I’ll never forget. If you’re in Havana and want to experience what I’m talking about, stop by their weekly event at La Piragua (Malecón and Calle O, in the shadow of the Hotel Nacional), held every Saturday at 5pm. You just might get lucky and spot me in some colorful get up on the back of a hog, throwing a shaka to my new friends-cum-family.

1. A perennial work in progress that’s like a so good, but so bad lover you know you should finish with but somehow can’t (or won’t), I’m determined to get this sucker published in 2012.

2. Granted, I don’t hang out with dissidents who are all up in that foreigner action – and not in a good, healthy way like this bunch.

3. Also a sign of my people: so many Harlistas smoke cigars and give them away like candy, I smoked none of my own stash the whole weekend and returned to Havana with healthy stores thanks to their generosity.

4. And let me tell you: the three puercos asados they laid out for the farewell lunch were the tastiest I’ve had in 10 years here, trumping memorable pigs eaten in a bohio in Pinar del Río, on a secluded beach in Las Tunas, and during carnival in Holguín.