Life here in Cuba – and my life, por díos – has changed dramatically in the past few years. I got a bike and helped found Habana Bici Polo; I opened Cuba Libro; and was thrust into the big, raucous family of Cuban Harlistas. As a writer, sub-cultures like this one are a perennial turn on. The layers of nuance and language particular to a group, the rites of passage, the history: every aspect is a source of fascination and writing fodder. Add sexy, powerful motorcycles and the machos who ride them to the mix…and, well.

I’ve just returned from the 5th Annual International Harley Rally in Varadero and the bikes (and riders) are as sexy and powerful as ever, the nuance and language and rites continue to evolve, and my admiration and passion for this unique group of Cubans remains unflagging. 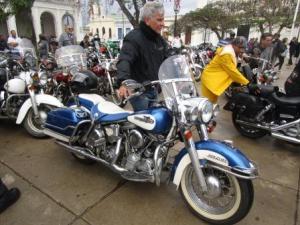 Since I’m one of the very few chicks without a steady ride and driver, every rally I cast about for singletons looking for a back seat Betty; I estimate I’ve mounted over a dozen of these classic Harleys since the first rally in 2012. This year, I rode with Raúl on Omar’s spectacularly-restored 1960 blue and white Duo Glide. We cruised straight through to Varadero under steely clouds with a nagging threat of rain that never came. The needle on the speedometer didn’t pass 80 kilometers per hour; when we arrived we learned it was busted and we’d made the entire trip doing an exultant 120 kph. We’d no idea as we fought a ferocious head wind and incoming cold front which set the sea churning and waves crashing just shy of the highway.

Among the many highlights of this year’s rally was the presentation of my book, Cuban Harleys, Mi Amor, co-written with Harlista Jens Fuge. In my opinion, this is the best book on the subject – not due to the writing necessarily (though it is fantastic), but rather thanks to the phenomenal images taken over a ten-year period by Harlista Max Cucchi. This is a distinguished book for several reasons beyond the writing and photos, however. First, it includes riders from the length and breadth of the island, not just Havana. Second, it contains the most complete history of Harley-Davidsons in Cuba. Third, all the text is in English, Spanish, and German. Last, but certainly not least: each person interviewed received a complimentary copy of the book and a full color poster. For those who have realized projects in Cuba and not done the same (whether it’s a TV series you promise to deliver on disc or memory stick; a photo shoot where you commit to providing the images to the subjects; an article or book on Cuba you say you’ll bring down once it’s published): shame on you. These people made time and dedicated energy so you could realize your project and have no way of procuring whatever you produced. Speaking from personal experience this is all too common. 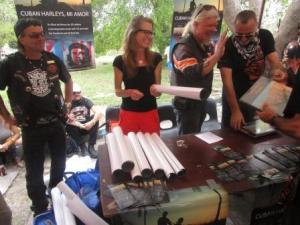 One of the most emotional moments for me was gifting the book to Gerardo López (Papá), the elder patriarch of a family which has four – and counting – generations of Harlistas who have all obtained their motorcycle license on the same Harley. The collective confirms this is the only family in Cuba which can make this claim. When I interviewed him for the book, an impassioned Gerardo, Jr told me he would never sell the Harley, that it would stay in the family. And I believe him: unlike many Harlistas who begrudgingly sell their hogs for cars as their family grows, this one added a matching side car instead, debuted at this rally. After I presented Papá with a copy, his teary-eyed daughter-in-law took me aside, to tell me something about this soft-spoken, well-mannered man that only two other people in the world know (and he’s not one of them): doctors recently found a tumor in his lungs and this would likely be his last rally. Receiving the book means the world to him, she confided, and would provide much solace as he battles cancer. That’s when tears started filling my eyes and the hairs on my arms stood up. It happened again at the farewell lunch when Gerardo Papá told me: “next year, I’m riding a Harley to the rally. It may be a trike, but it will be a Harley-Davidson, driven by me.” I dearly hope he’s right.

Like Gerardo Papá, many of the Harlistas are… Let’s just say as a group, we, like the motorcycles themselves, skew “older.” Also like the motorcycles, some Cuban Harlistas are walking (and riding) wounded: herniated discs, busted clavicles, chronic lower back pain, bum legs, bockety knees, failing night vision. It’s a bitch kick starting these bikes in the best of health; imagine what it’s like for Francesco fighting to kick start his ’48 Panhead with a perennial bunk leg. Or Paco, who at 69 years young, is one of the most enthusiastic and dedicated riders. Every rally he arrives from Camagüey with one of his daughters on the back of his 1950 hog; you can bet he’s got a bit of a limp after that 10-hour ride. Who wouldn’t?! This rally, William (‘The Canadian’), arrived listing heavily to port aided by crutches after an on-the-road accident and a bed-ridden month. 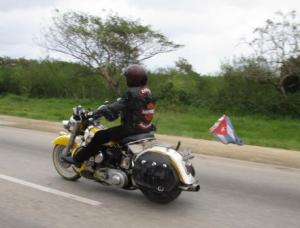 And then there’s the Story of M (I’m not printing his full name to protect the guilty!), who drove from Havana to Varadero, his leg in a cast and who also wobbling around on crutches. He told everyone it was a work-related accident, but knowing him better than that, I flat out asked what really happened. I’ve a talent for sniffing out falsehoods: he’d fractured his leg leaping from a balcony when the husband of the woman he was shagging turned up. ‘I got away, but with a cast,’ he told me smiling foxily. With these and other various injuries, aches, and pains, I’m guessing close to 10,000mg of dipirona and half as much ibuprofen was taken over the 3-day event. This may be ‘Club Temba,’ but these folks are the very definition of endurance: they’re riding the miles, partying until dawn, and up and at ‘em and back on their bikes (or back to fixing them), a few hours later. Props, brothers. 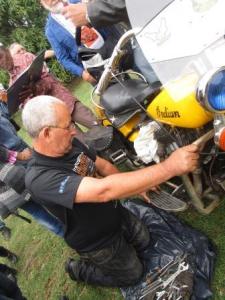 We always travel in a caravan for the inevitable breakdowns en route. This year, our group had their share of problems: a flat that took until 3am on the eve of the rally to fix; another flat on Gerardo’s side car just beyond Santa Cruz del Norte; a gummy piston on Pelussa’s rig at 2am under a fine, post-party rain; and something with Rafael’s ’46 Indian that drew crowds to watch the master at work. But these are minor compared to some years. Leaving the rally a few years back, we had to call on the Harley family in Matanzas to babysit Julio’s busted hog overnight until we could send a trailer to collect it. No matter the rally, bike, driver, or rider, there’s always an adventure afoot with these cats.

This year’s rally was the biggest yet, with more motorcycles, more Cubans from throughout the island, many more foreign visitors (some arriving on modern Harleys thanks to La Poderosa Tours), and exciting new activities. As always, there were the coolest t-shirts available in Cuba on sale; donations collected for senior citizens and vulnerable children; a rocking concert by David Blanco; and hilarious competitions involving bottles, hot dogs (only in Cuba, right?!), and feats of balance. This year also featured martial arts and acrobatics (yes, while on a Harley), a joy ride through Cardenas where all the neighbors came out to ogle these marvelous machines, and a farewell fête at an exquisite finca owned by a fellow Harlista. Rafael had to bust out his complete set of tools and attend to his Indian yet again while we ate, drank, danced, and laughed. A gang congregated around Rafael to provide support and advice (not that he needed it!) Anywhere else in the world, a mechanical breakdown during the final hurrah of a raucous weekend would have been cause for grumbling, but not here where solidarity, friendship, and empathy abound. I admire their strength and camaraderie and am honored to be included. See you at next year’s rally!