Inside a Cuban Posada

Brothels, bordellos, madams and the prostitution profession in general have long intrigued me. Even prior to writing about Heidi Fleiss (the Hollywood Madam), one of my first paid gigs as a scribe, I was a proponent of legalizing and regulating prostitution. For my money this is the best way to protect the health and safety of the providers and to bring the world’s oldest profession out of the shadows. It can never be eradicated – hooking, transactional sex, play for pay, whatever you call it – and if it can’t be wiped out, wouldn’t it be better for all involved if the violence and drug addiction, unsafe and underage sex, human trafficking and other related dangers could be addressed in a systematic way, applying legal and public health frameworks? I know some countries have taken certain steps towards this with mixed results – legal houses in Amsterdam; Sweden penalizes johns instead of prostitutes – and there are no easy answers. I certainly don’t have any, though I’ve thought about this quite a bit.

Prostitution in Cuba doesn’t interest me all that much. Or rather, sex tourism doesn’t interest me, but Cubans paying for sex does: it flows so freely here, it seems like money poorly (or desperately) spent. Some of this carnal action happens in what are known as ‘posadas,’ where rooms are rented by the hour. These fill a very specific need here since homes are overcrowded, while privacy is a luxury reserved for the very privileged. So it’s not all putas and johns that rent rooms by the hour, but also couples who just need a place to screw. Posadas are easy to identify. You know those little blue symbols on Cuban homes which signify that they rent to foreigners? There’s another, identical sign, but in red, which means the house rents rooms to Cubans only, in pesos cubanos. I’ve always wanted to rent a posada room for an hour or two, just to see what it’s all about until a friend said: ‘are you nuts?! All those rooms have holes for peeping or filming.’ That turned me right off to this new Cuban experience I sought.

Fast forward to last week and where do I find myself? In a posada in Santa Clara. My friend José and I went to the city of Che/city gay to celebrate International Day Against Homo/Transphobia, but we had no accommodation lined up. Our budget was tight, we were tired, and José offered to hunt down a house. He found something affordable, a bit outside the city center, but we had transport. The only catch was we had to be out by 10:30 the next morning – “seems like they’ve got a ‘palo programado’ (a scheduled screw).” I was too exhausted to ask. When we entered the room – no window, no toilet paper, no hot water, one pillow, one towel and an Igloo cooler on the floor filled with ice – I collapsed on the double bed, but sleep was elusive. The stench of cheap air freshener permeated everything – the sheets, my hair, our clothes, even the stale air stank. We slept with the door open to provide a shred of relief from the olfactory assault. Luckily the room faced a brick wall – to keep out prying eyes.

We awoke fairly rejuvenated in spite of it all and I was looking forward to getting a glimpse of the pair who had a standing date each Friday morning (escaping from work and/or spouses with a handy excuse I would have loved to hear but there are some things you just don’t ask). At 10:30am sharp, a cherry red Dodge with blacked out windows rolled into the interior patio and out stepped a bleached blonde temba (a woman of my age more or less) in platform heels and a puss on her face. A lover’s spat, perhaps? Her companion looked more upbeat (don’t they always?!), having already doffed his shirt in the mid-morning heat. We rode away and I was ready to get as far from the stench of chemical flowers as fast as possible. Too bad it still stuck to my skin.

Two days later, we got caught in a mountaintop rainstorm, quickly scrapping the idea of camping. Instead, we headed to the closest big town to look for a room. We rolled in to Cumanayagua at about 9pm, wet and tired after an all-day hike and were directed to a corner on the outskirts of this bustling rural berg. The sign said: Hostal, 24 hrs, AC, hot water TV and DVD. José walked through the big steel sliding door which I’m learning is typical of posadas (so cars can enter and the lovers can rent their room without being seen) to talk to the proprietress. Standing on the sidewalk, the smell of urine stinging my eyes, I heard her ask: “you want the room for the whole night?! It’s $4.” Suddenly I knew what we were dealing with, but I didn’t know what we were in for. We rented the ground-floor room and once again were assaulted by the cloying stench of cheap air freshener. Was there some lucrative business selling this shit by the gallon to posadas, I wondered?

The bed was flanked by golden gilded mirrors and even tackier curtains without a purpose; a TV on a retractable arm like they have in hospitals pointed towards said bed. There was a DVD player with a disc in it. I would have bet my life that it was some kind of B-grade porn; if I had, I would be dead. It was actually 172 minutes of C-grade music videos. While I surveyed our $4 surroundings, I overheard the señora say: “Who knows? Her ID card says it’s her, but I have no idea.” As if I would be in the middle of nowhere passing a fake ID at a flophouse that reeks of faux flowers and piss… 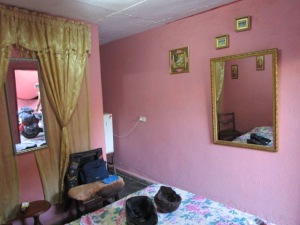 We hung our wet shirts and pants and socks on a clothesline we strung across the room and took a cold beer and cola from the fridge. That’s when I saw the first cockroach skitter along the wall – a Lower East Side-type sucker, the size of a Bic lighter. I decided it was time for a shower. My flip flops firmly on my feet, opting for our soap rather than the complimentary – used – cake on the sink, black hairs and all, I tried scrubbing the road grit and posada perfume from my body. I succeeded in ridding myself of the former, the latter not so much. When the soap slipped from my hand and skidded across the shower floor, it picked up a few black hairs in the process. Before getting into bed, I wondered who would actually use the comb provided for guests – obviously someone had. 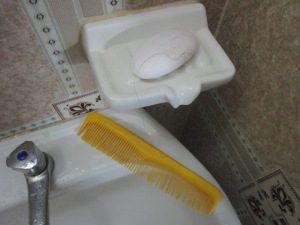 Our hostess warned us that we had to be out by 8am (another early morning ‘palo programado’) and we were beat besides. We woke to the familiar smell of piss and air ‘freshener’ and packed quickly. Another cockroach sighting later and we were out of there. But as we did our final check around the room, the fan mixed with a breeze and flipped up a corner of the sheet, under which was a condom wrapper. At least they’re practicing safe sex, I thought. Ciao Cumanayagua, it’s been real.

I’ve now had my Cuban posada experience – twice in five days. Believe me, it was plenty.

I need to add a little postscript to this post which has nothing to do with posadas but everything to do with how Cuba continues to puzzle. Besides, I need to exorcise the images swimming around in my head. In the five days we were tooling around the Escambray, I learned of a disturbing fact of local life. My friend José told me of a fellow he knows in the tiny town of Cordobonal who is clinically insane. And his family, rather than commit him, keeps him in a cage. I asked my friend not to share information like this with me; as a writer, I was visualizing his whole miserable existence (and that of his family). Later that night, sitting with José’s family in a similarly tiny town, I learned that his cousin’s wife has a nephew who went insane at the age of 14. For the past 17 years, this young man has been living in a cage as well. I think the worst part of it all is that my friend’s cousin was asked to build that cage – and he did. If I’m having trouble with the image of people living in cages, what about the person who builds them? I shudder to think. What makes it even more difficult for me to process is that Cuba has a national network of psychiatric hospitals – all free. Sure, conditions can be pretty scary, the food is scarce and terrible but is this worse than spending your life in a cage? I was talking to another friend about this yesterday and he told me about another one in the center of Vedado that he can see clearly from his balcony. And last night, I was watching Going Clear: Scientology and the Prison of Belief (a documentary that has gone viral here) and I was left positively speechless when I learned that L Ron Hubbard kidnapped his young daughter as revenge against his wife in the 1950s, took her to Cuba and left her with a mentally disabled Cuban woman – who kept the young Hubbard girl in a cage. WTF people?! This boggles my mind, but it’s got me thinking I should make my own documentary…

12 responses to “Inside a Cuban Posada”