Our summer vacation plans were simple and cheap: strap the camping gear onto the 1946 Harley-Davidson and plunge deep into the mountains of Pinar del Río, getting as far from hot, hectic Havana as we could without a visa. We were broke and stressed; our souls needed to sigh a bit among the pines and pure air.

This sounds nuts, I know. Who in their right mind vacations where there is no plumbing and more livestock than people? To boot, our transportation is a 72-year old motorcycle held together by string (literally; more on that later) and we’d be camping in a place where, incidentally, camping isn’t a thing. Add to this the general state of Cuban roads, the crippling August heat, and dearth of gas stations, stores, and food, and you begin to understand why the whole idea had family and friends from near and far expressing concern for our sanity. 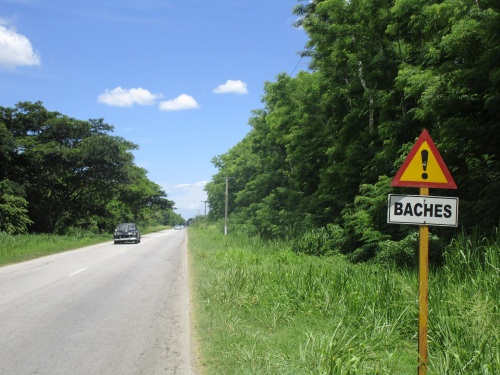 But this wasn’t our first rodeo. Last summer we traveled nearly 2000 kilometers between Havana and Granma on that same Harley as research fodder for my new book. Yet this was something altogether different. 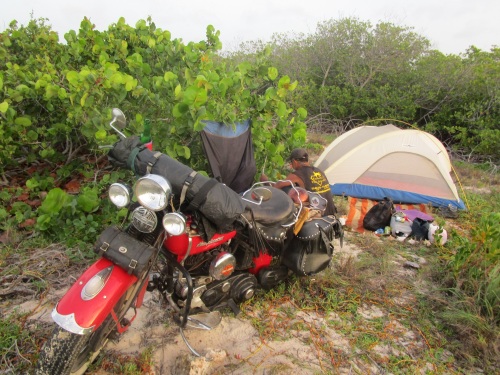 This time we were considering taking the dog.

Our decision wasn’t snap or capricious; we’d deliberated and debated – conversations which left me more comfortable with the idea of canine accompaniment but not entirely convinced. And being the youngest of four from a poor household (i.e. too self-centered than my station or accomplishments warrant), I wondered: how does bringing Toby benefit me? Unless I sold the story to The Sun or New Yorker, it seemed like a lot of work for negligible reward…

The evidence base, if you can call it that, was slim and partial for how Toby might comport himself on our odyssey. We’d spent a sublime weekend camping at seaside Canasí where he romped in the woods, lounged by the campfire swollen with tinned meat, and ran, tail between legs, from the surf. And there was no question the little guy loves to ride: every day, paws on the handlebars, ass pressing against José as we bank turns, we commute to Cuba Libro on the Harley. But what we were proposing wasn’t just a weekend within striking distance of the capital or a five-minute jaunt between home and work. This longer, more remote trip promised to be more intense. Way more intense. 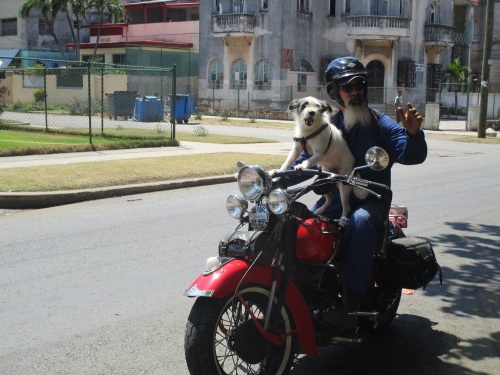 The idea was a week-long back country camping trip covering over 600 kilometers through the mountains of Pinar del Río, towing a trailer with our gear and Toby in his cage. Never mind that Toby, a dog rescued from Havana’s mean streets, had never before been in a cage.

Both José and I have extensive riding and camping experience – he more of the former, me better-versed in the latter – but as a team we were motivated and adept. In short, we had the chops to make it happen, dog and all. Toby? I wasn’t at all sure how he’d react.

For those not familiar with Cuba, let me explain why this plan sparked a second round of concerned emails, which now expressed fears for our sanity and Toby’s safety. First of all, there are no Harley-Davidson dealerships or parts sellers in Cuba. Should we break down in the middle of nowhere – if a cable or gear shaft or belt should go – we were on our own. Luckily, my pilot José is a crackerjack machinist, electrician, and inventor (it doesn’t hurt that he’s also easy on the eyes!) Plus, the Harley is made from real steel that can take a beating. Second, in Havana, you can’t just pop into a Petco for a doggie cage or AutoZone for a trailer. All this had to be built from scratch and scrap – on a limited budget. These weren’t hurdles we could throw money at. Complicating matters is the fact that there is nowhere to officially camp on the island – we’d have to be tremendously resourceful and somewhat careful to find practical, pleasant places to camp (last year we pitched camp too close to the naval base in Guantánamo). And one more detail troubled me: dog food isn’t sold in Cuba. We were used to cooking for him daily at home, but on the road? It’s not like we had a camp stove or anything. 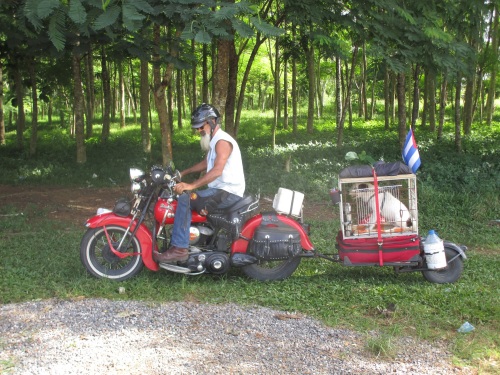 The one-wheel trailer, hitch and cage were designed and built by José using salvaged wood and wire, supplemented by re-purposed refrigerator racks and dorm room crates dating back decades to my NYU days. The cage door was held in place with a bungie cord – release the cord and the door swung open. The cage (or “chariot” as my friend Chris prefers to call it), sat atop a suitcase containing our camping, cooking and snorkeling gear, plus our clothing, food and my reading/writing materials. The suitcase nestled perfectly in the trailer’s bed and elevated Toby and chariot above the exhaust pipe. Even with all this killer design and forethought, I wasn’t at all sure how Toby would handle it. José told me not to worry. Like that ever works.

Once everything was strapped down and secured, we placed Tobito gently in his cage. He was more enthusiastic hitched to the Harley than when we tested it in the living room. So enthusiastic, in fact, he started barking as soon as we hooked the bungie cord into place and didn’t stop until we unhooked the door (every couple of hours once we were on the road). It was 600 kilometers of non-stop, on-the-road barking – maddening for us, but he was a happy camper. He wagged his tail wildly, caught the wind of the open road upon his face, and sniffed eagerly at the goats, cows, and pines as we passed. He often had an erection. By the time we got home, he was hoarse from so much barking and we were aurally traumatized. But he was a trooper and a champ, never messing his cage, protecting our camp at night and hopping gleefully in and out of his chariot by trip’s end. 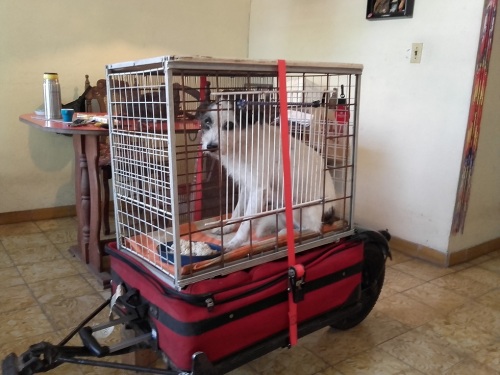 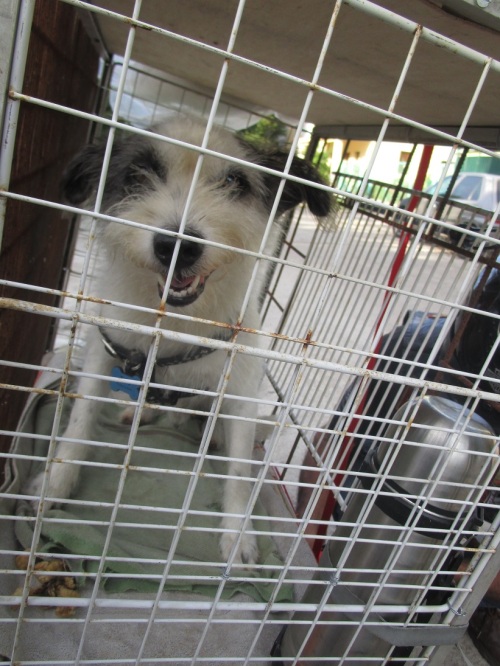 We’d pre-cooked five days of meals for Toby, freezing it and storing it in a little Styrofoam cube. It kept well for four days and the last meal we fed to an emaciated country dog who devoured the almost-turned liver and rice. Once the precooked meals ran out, we fed him hot dogs and canned meat balls cooked over the campfire.

When we caught bad weather (repeatedly), we would quickly pull over and bivouac under sheets of plastic. Together with trailer, Harley, chariot, and gear, Toby, José and I would huddle under a plastic teepee and prepare our little cafetera to enjoy some sweet, hot, dark espresso as we waited for the skies to clear. We had no camp stove, but lo and behold! At our first rest stop, José whipped out a ‘revelberro’ – a one-burner wonder made of two steel pieces: the base which gets filled with luz brillante and the burner, which is placed on top. In Cuba, you learn something new every day and though I’ve camped the length and the breadth of the island – from Granma to Guanahacabibes, above and below waterfalls, on the beach and in the bush – I had never seen one of these nifty units before. It’s not only great for camping, but also blackouts, hurricanes or when you forget to pay your gas bill. Note to self: see if José’s sister will sell me her revelberro. Toby didn’t partake of the rich and delicious café Cubano, but we granted him tent access during thunderstorms and rain. Hot dogs and meatballs, tent privileges and unparalleled adventure: this is one lucky doggie.

We crawled out of the tent after one of these summer storms broke and found a horse grazing under a double rainbow. On the far west coast, when the clouds shipped out after a nighttime tempest over Guanahacabibes National Park, we wished on shooting stars. We shared crack-of-dawn coffee facing the caves from where Che commanded troops during the Bay of Pigs with the site’s historians one day and sipped the best espresso (served in little coconut shell cups) with a campesino family in their dirt floor home the next. 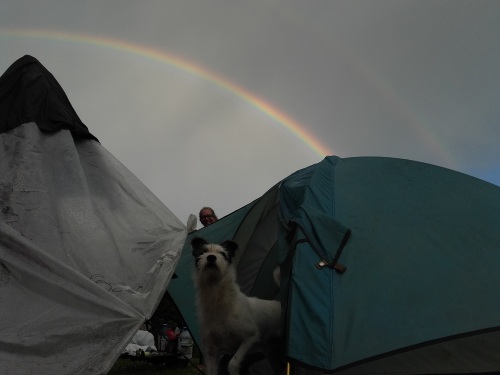 No cell phone service, no showers or tour buses or air conditioning: camping in Cuba is not for the fastidious or faint of heart. The lazy or timid also need not apply. But if you’re looking for a unique adventure – natural, cultural, logistical – consider this alternative. Even if you don’t have a car or bicycle (or Harley!), a similar trip to ours is possible. Parts of it you won’t want to replicate, like when one of the seat springs (about the size of a small peach), busted in two on a remote road cleaving between mountains. Suddenly I was leaning dramatically to starboard. José cut the motor and set to bending and re-threading the spring to make it shorter, but strong, reinforcing it with several lengths of twine.

If you’re game for this type of trip, it helps if you speak Spanish and can build a decent cooking fire, but with gumption, a phrase book, and healthy stash of protein nuggets and nuts, you can camp here way off the grid and without leaving a trace. If you’ve dreamt of this kind of vacation, you may find these tips helpful, honed over 15 years of camping on the island: 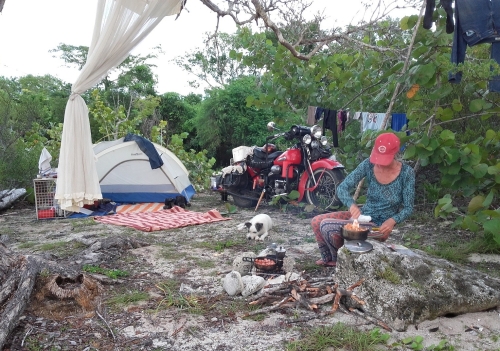 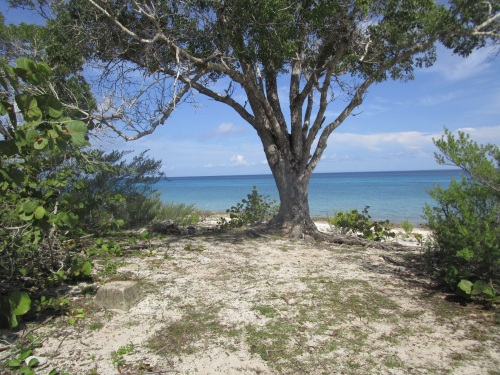 I wasn’t sure about taking Toby at the outset and even mid-trip, when José declared he’d go camping with Toby again in a heartbeat, I wavered. But once I saw Toby leaping into his chariot with a mini-erection somewhere around Valle de San Juan, barking like mad, I was already planning our next adventure to Pan de Guajaibón.

Tagged as camping in cuba, cuba adventure, cuba off the grid, cuba. travel, DIY cuba, harley davidson in cuba, hiking in cub, off-the-beaten track, where there is no cell service in cuba