Birth of a Biker Bitch

Fifteen or so years ago I was living above a taquería and across the street from one of San Francisco’s largest thrift stores. Community Thrift wasn’t the hippest or most swank, but it stocked the eclectic, second-hand zaniness that city is famous for. Living right across the street was dangerous: it made it all too easy to accumulate cool, cheap shit that ends up collecting dust.

This is how I came across an $18 vintage Harley Davidson jacket. Little did I imagine all those years ago that one day I would be flying along the coast east of Havana on a 1948 Harley wearing that jacket (see note 1).

Seeds get planted, people. Cultivate them – however long it takes – and you shall see that flora flourish, I promise. The problem is, I’ve planted seeds I cannot tend alone – that are so profligate I can’t handle their abundance. When this happens, I write (to wit: this blog!). So while I had no intention of revisiting the Harley scene here at Here is Havana, my garden runs amok… 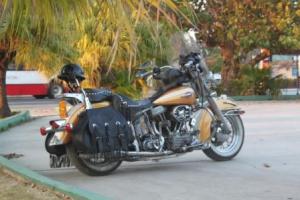 One of the 12 bikes Ive ridden on…

Some of you may have read my chronicle of last year’s Varadero Harley Rally/Encuentro de Harlistas Cubanos, my first taste of the HD world (save for one long mountain ride years ago, pre-vintage jacket, with a guy who couldn’t hold my attention). Long and short of that post about the Cuban rally? These pre-1960 bikes are impressive and the folks who keep them running and enjoy riding them more impressive still. When I was invited back for the second Encuentro, I was all game.

This year’s event was even better than last – for many reasons but the fundamental one for me was what occurred in the months between rallies: I’m now collaborating with Max Cucchi on his photography book about Cuban Harley riders. Since the 2012 rally, I’ve been hearing all the stories, learning the history, and interviewing the clan. I’m also riding on the bikes; 12 of them to be precise and I anticipate trying out more (see note 2). 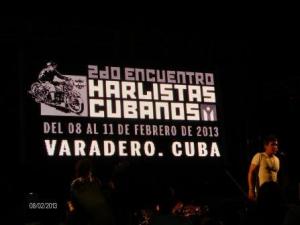 It’s true I cringed when that foreign photographer called me a bike dyke, but I have to admit it’s a hell of a lot of run riding on these thundering, troublesome machines. The thing is, riding can’t compare with driving and I know that’s where the real thrill lies (am I doomed to now accumulate a totally cool but not-at-all cheap piece of dust-collecting shit?!). Me acquiring a Harley Davidson is entirely theoretical since I can’t imagine abandoning my beloved bicycle and don’t have the money for anything motorized beyond a rikimbili (see note 3). But while interviewing Cuba’s only female Harley rider for The Book, she offered to let me take her 45 for a spin. Another seed planted, I’m afraid. 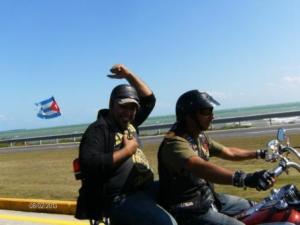 I’m excited about The Book, in no small measure because it has opened up a whole new world to me, populated by extraordinarily fun, creative, and collaborative Cubans. Until further notice, however, I will be referring to this project as The Book. It had a proper title, which has since been relegated to a working title. Why? Because this is Cuba: things are complicated and being immersed in a rich, rare breed subculture like that of the island’s antique Harleys means being privy to all the gossip, tussles and intrigue therein. Good manners and my desire for everyone to get along prevent me from going into it here. Plus, I’m just the writer/rider so it’s best if I wait and see how it all shakes out. Until it does (in 12 months or so when we go to print), I shall be referring to this project simply as The Book (see note 4). 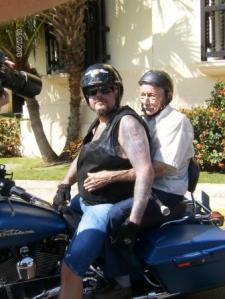 Cheito Puig, 103 years old and still on a Harley (he’s featured in The Book).

Besides, none of that is important. What is important is that The Book has images by Max, text by me, and the passion of generations of Harlistas Cubanos.

Notes
1. There are no pictures of me en route, wearing said jacket, since my camera mysteriously disappeared the first night of the rally.

2. As I was readying this post for print a few days ago, I mounted my 12th Cuban Harley. The occasion was a beach BBQ with the gang – fun stuff. Unfortunately, the beast coughed, sputtered, and died two blocks from my house. During curbside repairs, the carburetor caught fire. ‘Socio, you got a fire going there,’ more than one passerby noted casually while eyeballing the red and chrome, leather-accented stallion. It took about an hour to get running again (watered-down gas direct from the Cupet seems to have been the culprit), but that was just the beginning of the 15-hour adventure. A key piece flew off as we flew down the highway; we had to stop at least have a dozen times to do repairs (correction: I watched as my driver and assorted others did repairs); the ‘suicide’ clutch kept getting stuck; and we ran out of gas at 1am in Centro Habana. I guess I’ve concluded the honeymoon phase with these Cuban Harleys… 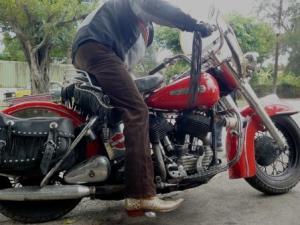 Even breakdowns are fun in Havana!

3. These are bicycles outfitted with small motors, usually powered by a liter-and-a-half bottle holding kerosene.

4. Not to be confused with my abandoned memoir. Sigh.

14 responses to “Birth of a Biker Bitch”