[tweetmeme source=”connergo” only_single=false] I ventured once again outside my comfort zone yesterday here in Havana: I went to mass. It was as oppressive (and let’s be frank – hypocritical) as I remember from Jesuit high school (see note 1), although this one was presided over by the big Catholic kahuna himself, Pope Benedict XVI. It was also mercifully short.

While I’m sure you’re oversaturated with ‘The Pope in Cuba’ news up your way, one of the indelible lessons I’ve learned in my 10 years of island residency is that the picture you get of here from there – especially when refracted through the lense of reporters sent to cover such an event – does not accurately reflect what we’re experiencing on the ground. It’s not only that every media outlet from The Militant to FoxNews has an agenda. The view is skewed also because Cuba newbies rarely grasp the complexities of our context (see note 2), nor the attendant history influencing those complexities. You don’t get this perspective unless you’ve been around and stick around and only if you speak Spanish – even a translator is no guarantee (see note 3).

So let me tell you about the mass I attended yesterday under a blazing sun, delivered by a frog-like man in a funny hat.

What folks are saying: One of the pervasive myths about Cubans is that they’re afraid to speak their minds or offer opinions, and that self-censorship is rampant. While it’s undeniable that people keep their heads far below the parapet in the workplace and have the tendency to adjust responses to what they think people want to hear, I’ve always found Cubans to be fiercely opinionated – once you get to know them. Or more to the point: once they get to know you.

The Pope’s visit confirmed this impression.

“I’ll come by your house once The Almighty Pope leaves and things calm down.”

Rocking our rum-pork-party holy trinity: Another element piquing my interest was how Cubans approached this whole Papal visit. Essentially, yesterday felt much like hurricane preparation and landfall: people laid in stores and stayed home watching events unfold on TV, with some chicharrones and a bottle of rum close at hand. Except – and this was a rude awakening for several of my unprepared friends – authorities instituted a booze ban the evening before, which lasted until the Pope Mobile and its cargo were safely at the airport. So those who didn’t lay in the ron were homebound with pork, friends, and family, but no curda. In my decade here, I only recall a few alcohol-free events: election days are always dry and if I’m not mistaken, they did the same during the Non-Aligned Summit here in 2006. Let me tell you: no rum makes Havana kinda grumpy.

Revenue coup: The cleverness of Cuba never ceases to amaze me and yesterday didn’t disappoint once I saw the huge numbers of tourists in the Plaza for mass. My first clue was the distinguished older gentleman of means dressed in khakis, a pink Oxford, and penny loafers, with not a gin and tonic in sight; clearly not one of us. I started looking closely at the crowd and their clothes and distinguishing different accents. Nicaragua, Argentina, Chile, Panama, the DR, USA, PR, Mexico, Venezuela – flags from all across Latin America snapped in the wind whipping across the Plaza and I realized that aside from the pride and so-called “soft power” the Papal visit signified, it also represented a hugely-needed and greatly-appreciated influx of tourist cash. There wasn’t a hotel room to be found; paladares overflowed; extra charter flights were added from Florida. And all Habaneros (save for cops and docs), were given a paid day off. This is the type of devotion we could use more of and we thank you for supporting the cause.

The US matters less: After Juan Pablo II’s visit in 1998, Bill Clinton’s White House issued a press release announcing new policies ostensibly resulting from this historic trip. Most importantly, the release approved people-to-people visits in order to foment “regime change” and “promote a peaceful transition to democracy” – concepts mentioned no fewer than six times in the short document. Blatantly threatening the national sovereignty of an independent and peaceful country thusly is absurd enough, but that Obama maintains precisely the same policies and parrots exactly the same rhetoric 14 years later – that’s just loco. While the US is embarrassingly and unjustly static in its policy, the world and importantly, Cuba has changed, is changing still. Raúl is a different bird from his brother and that manifests itself in many ways, including less of the ping pong policy-making that based decisions on what the bully to the North was doing. That’s how it looks publically anyway. 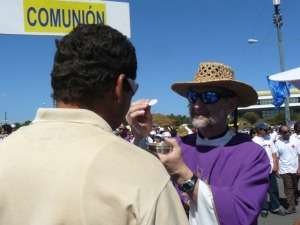 As anti-climactic as the Immaculate Conception: I’m sure you’ve already divined that the religious importance of having his Holiness here held no interest for me and in this I’m not alone: I’ve never seen an event so thinly attended in the iconic Plaza de la Revolución in my 10 years here. In fact, we strolled into the central area just a few moments before the 9:30 mass kicked off and were going against the current of people streaming away from the square. “I came and took the pictures I wanted; I’m going home,” a friend I ran into said. The curiosity seekers and thin crowds were surprising but make sense: as a whole, Cubans just aren’t that church-y. Religious and faith-bound, yes, but that’s different from kneeling before a man in a dress and goofy hat while he proselytizes a doctrine peppered with sins bound to doom your mortal soul. Cubans just aren’t down with that, but they do love a spectacle: one of my favorite moments was when a women who wanted to taste the host tried to fake her way through the motions while the priest held the wafer aloft. When he caught on, he patted her on the head and returned the host to his jaba. Though the Pope himself failed to inspire, Cubans never do.

1. This, Fidel and I have in common, except those same Jesuits expelled me my junior year (another story entirely!)

2. A simple example: journalists arrive here and compose some flaccid or purply prose (even leading with it occasionally, dios mío) about all the old cars rumbling about. For those of us with continuity here, that’s ‘dog bites man.’ The more compelling, ‘man bites dog’ story is the unbelievable amount of new cars on the road and what that means for traffic, transport options, pollution, etc.

3. The press conference by Foreign Minister Bruno Rodriguez upon the Pope’s arrival is case in point: his response to an English-speaking reporter about “freedom of consciousness” was elegant and sweeping in the original Spanish, mangled and less inspired in English.

4. Cuba has limited bandwidth due to the US embargo-cum-blockade which prohibits the island from connecting to underwater cables running nearby. Instead, the connection for the entire island is provided by a sole, slow Italian satellite. This bandwidth was prioritized for visiting press so they could report live from Cuba. It’s back now, thankfully, obviously.