If you follow my blog or any similarly semi-intelligent Cuba-related news outlet, you know that things are fast a-changin’ on this side of the Straits. For those out of the loop: in April, 2011, a series of unprecedented policies – which amount to a new (and not without substantial risk) economic paradigm for the country – were approved at the Sixth Communist Party Congress (see note 1).

Though some of my Cuban friends gripe that change isn’t happening fast enough, I’ve been surprised by how many new policies have come to pass as promised: private sales of homes and cars, relaxed regulations for paladares and casas particulares, and the approval of nearly 200 pursuits and services for private enterprise. Other movement towards so-called normalcy is slower and more complicated still: unifying the two official currencies, salary increases, and phasing out the permiso de salida (see note 2) among them.

What these changes will mean for the most vulnerable remains to be seen and I have not a few friends here tormented by uncertainty, anxiety, and a generalized malaise in the face of it all. Uppermost in their hearts and minds: what might these changes mean for the political, social, and ethical tenor of the revolutionary project so many have fought so long to strengthen and so hard to save?

Some days it feels like it’s all going kablooey – that the Cuba we’ve known is reserved now for dewy-eyed nostalgics fingering grainy photos of the 10 million ton harvest. And this is heart breaking to people who have survived so much drama and tragedy: the rending of families in the 60s and 70s, (plus the Bay of Pigs and Missile Crisis), followed by the Mariel boat lift and collapse of the Eastern Bloc in the 80s which led to the torturous Special Period of the 90s. Then there was Fidel passing the baton to hermanito Raúl which I guarantee looks different from your off-island perspective than from ours here in Havana. And let’s not forget the 50 years of sabotage (both bald-faced and covert) by the behemoth to the north, to say nothing of terrorist attacks by US-sheltered individuals and groups.

So before it all goes kaboom (a day late and a dollar short, perhaps?), I’m determined to document the Cuba I’ve known for the past 10 years and the attendant change as accurately, responsibly, and comprehensively as possible. Today, I turn to an examination of the black market.

Jeans and stilettos, perfume and gas. Cigars of course, but also ice cream (Coppelia, the country’s best), and iMacs, milk and meat: it’s all available on Havana’s black market – if you have the hookup or happen upon someone “repurposing” Cuban Clorox or café. In the interest of full disclosure, I have very little direct experience with the black market (or parallel market as Cubans call it) despite a decade in residence; I have no car, so no need for gas, I buy my meat off the cement, fly-spotted counters at my local carnicería, and would love a Mac but don’t earn enough to join that club. Besides, all that shit is stolen (see note 3) and I’ve had enough stuff vicked in my life to know that if you ain’t part of the stolen goods solution, you’re definitely part of the problem.

But then the moral high ground begins to shift (Cuba is funny like that).

Every once in a while, a kind-faced granny shows up at my door selling either eggs (see note 4) or powdered milk – a key ingredient in the Cuban kitchen. Someone on the block must have told her an extranjera lives in Apt 5 because she came straight to my door that first time, knocked hard and called me La Rusa (“The Russian” – old stereotypes die hard). She’s a bit gnarled and I can tell from the edge in her voice and the fade of her blouse that times are tough for the milk-peddling abuelita. Unfortunately, when I need eggs, she has milk; when I want milk, she has eggs. So even though I was keen to help her out, our supply and demand algorithm never quite jived. Last week, her friendly face appeared anew at my door.

She didn’t have any that day but promised to “resolve” some; I promised to buy it once she did. 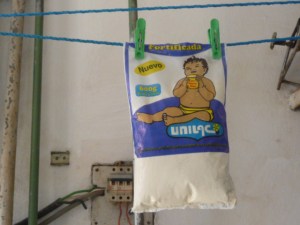 Sitting in my office yesterday whittling a Tweet down to 140 characters instead of working, I once again heard her hearty knock at my door. Smiling big, she told me she had three sacks of milk for sale at $2 a pop (a 50 cent savings over the official store price). I agreed to take one, glad I was finally getting the chance to help out granny. Until she pulled the sachet from her frayed knapsack: I, we both, were taking milk from the mouths of Cuban babes. What my elderly friend was selling was the milk the government guarantees to every child under 7 and I’d just purchased 600 grams of it. I knew that milk wasn’t going to be too tasty.

This transaction got me to thinking about where all this stolen stuff comes from and put me in mind of my friend Alberto. He has an old Lada on which his livelihood depends. Driving around recently, I noticed a balón de gas (the 20-lb tanks used here for home cooking) wedged behind his seat. Seems Alberto had converted his gas-powered car into a propane-propelled one.

This was a smart investment on his part: although the conversion kit cost $350 and had to be imported from abroad, Alberto fills that tank – which takes him 120 km or so – on the black market for just $5. By way of comparison, that same $5 would buy 15 liters of real gas on the black market; just over four at the pump. I’m glad Alberto has figured a way to enlarge his margins, but wonder about the families who show up to fill their kitchen tanks to be told “no hay” (there isn’t any).

This same pattern repeats itself with steaks and blocks of Gouda, stamps for official paperwork (I was surprised to be asked to produce receipts for my bank-bought stamps on my last visit to immigration) and cooking oil. And while I can appreciate the need for every last Cuban having to do something (or something extra-legal) to make ends meet, the more I parse the situation, the more unsettling it becomes.

And it makes me realize that a certain amount of that aforementioned moral ground is shifting below my feet. At these times I’m forced to ask myself: is this is a part of Cuban culture I wish to participate in? Unluckily for my milk-thieving granny, it is not. But I’m sure she’ll find other clients: as long as there are commodities like oil, meat, and milk to “redirect,” and resell for pure profit, folks will do it.

1. These political powwows are held every so often (the last was in 1997) or mejor dicho: whenever sufficient excrement threatens to make contact with the cooling element, if you know what I mean.

2. All of these issues came to the fore in nationwide public referendum-type debates held in late 2010. The permiso de salida is an exit permit which is mandatory for overseas travel by Cubans and residents. It earns the country revenue, but is also a barrier to travel – an issue that has to be reconciled somehow and soon.

3. Except the goods in the black market Mac store. None of this is stolen, but rather all new, in-the-box gear with warranty and all, purchased in Miami and spirited into the country.

4. Eggs aren’t usually stolen either, but rather the product of home-raised hens.