Life has become way too complicated (and trying, truth be told) lately – something I predicted would happen. I chose to pointedly ignore the trying part here in that ‘hey, it’s a new year, maybe the world really isn’t going to shit and perhaps I will finish my memoir’ spirit of things. Also, since Cuba’s default setting is Trying, I didn’t want to beat a dead horse. Instead, I focused on the need to balance competing priorities and reminded everyone – myself included – to take the time to stop and smell the roses.

Six months on I can safely say I’ve failed pretty miserably in following my own advice (see previous maudlin post!) and that new year’s optimism has, once again, proven to be a fallacy: the world is going to shit, my memoir continues to gather dust, and I can’t even sort through the priorities, let alone begin to balance them.

Regular followers of Here is Havana will have noticed a precipitous decline in new posts over the past year and for those who care: so sorry. If it’s any consolation, not writing screws with my head mightily since it’s a form of catharsis and therapy – something anyone who lives long-term in Cuba needs in spades. So, here I am again, with a new proposition: a series of short dispatches crafted from various Cuba experiences, 2014.

Let me pop the Dispatch cherry with one of the country’s oldest outdoor music festivals, Atenas Rock. Held in a copse tucked back in the hills of Matanzas, this weekend rock festival features two days and nights of heavy/death/black metal, camping, and more drinking and drugs than food and water. I had no idea what to expect and knew only one person in our piquete. But I love to camp, (plus it’s something I’m good at); I can never get enough rock and roll; and I always like to meet new people. To hell with competing priorities, I thought as I packed my camping hammock. 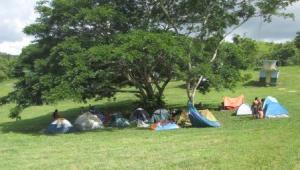 Although this type of metal isn’t generally my cup of tea, I’m 13% more deaf, which is generally a good measure of a proper rock festival. It’s terrible for my friends, family, colleagues and anyone else with whom I converse of course: I only hear half of what they’re saying and the rest of the time I’m shouting because my volume control is busted. But Atenas Rock 2014 was completely worth it.

Everyone tells me this wasn’t as good as other years, in another era, but this weekend festival has some basic factors working it its favor. First, the setting in a grassy valley surrounded by woods bisected by the meandering Canímar river, is majestic. Second, the entire affair is free – the camping, the music, swimming in the refreshing pocket pools along the river. And, much to my amazement, Matanzas has some pretty good rock and roll bands (though groups come from Havana, Holguín and other provinces to play here, transport difficulties and lack of resources mean Matanzas is heavily represented); keep your ears open for Rice & Beans and Stone Road, especially. Finally, though there was liberal intake of all sorts of psychotropic substances, it was a very mellow, even family atmosphere, with long-haired rug rats throwing up the devil horns as they frolic in the river. 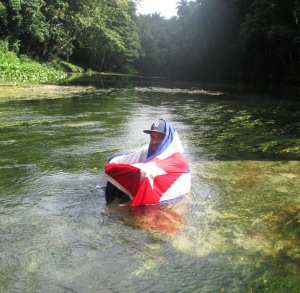 Some aspects, however, were less than ideal. Like not providing a single bathroom for the hundreds of concert goers? A shit show, literally. To be clear: I have no problem peeing and shitting in the woods. Indeed, I’ve logged en plein air baño time all over the world, from Hawaii and Bolivia to Morocco and Guatemala. But after a weekend of roughing it with people ignorant of the most basic camping tenets, heading into the trees when nature called was like walking into a feces minefield. To wit: my friend went to pee before turning in the first night and almost took a massive digger when her flip flop skidded in a pile of human shit. The kid in the next tent convulsing and barfing, pausing just long enough to shout about how he was possessed by a santo malo was also a bit of a downer. I, for one, was thankful when he passed out long and hard.

Sleep was elusive, what with deafening decibels shaking my tent flap and too many of the bands played covers. Hey, I like a good cover just as much as the next rock ‘n roll chick, but when it’s Highway to Hell played by six different bands, some badly? It gets a little tiresome. And it’s a waste of valuable stage time. But all in all, it was a fantastic festival. I can’t wait until next year. Rock on! 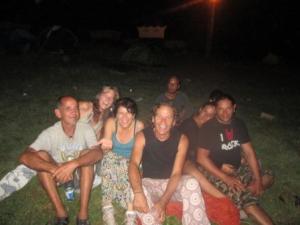