Adventures of the Cuban Virgins: Part I

[tweetmeme source=”connergo” only_single=false]Honeyed, late-afternoon rays streak down Línea illuminating two men, each carrying a conga in one hand, a cajón in the other. An old Dodge, Ford, then Buick rumble past a tattooed youth helping a blind woman across the street and the smell of baking bread lifts even the darkest mood.

“Can I stay here forever?” the bassist asks so soon after arriving I haven’t yet learned his name.

“Slow down, caballero. You haven’t even been here a night and day. Let’s talk tomorrow.”

I am anxious about this visit: somehow, I’d convinced eight complete strangers to come to Cuba and I’m not sure how they’ll handle it (not everyone can). I know Will in passing – the raison d’être for this descent of California talent upon Havana for the jazz fest – but at this point, the rest are simply the guitar player, the drummer, the bassist, the girlfriend, and the parents. Months in the making, this visit is a dream realized for me: ever since my first trip here in 1993 when Cubans across the island begged me for Kenny G cassettes, I’d felt a moral obligation to share with them higher quality sounds from my patria. This was my chance, but I’d never been involved in a music festival beyond being in the audience – enthusiastically, deliriously, but still.

What was I thinking?!

I didn’t grow up in a musical home and don’t play an instrument. While I’d love to learn to play guitar, until now, I’ve only collected guitarists. I envy the universality, the pure luxury, of music: as a writer, I’m limited to (mostly) one language, but ripping through a riff or pounding out a rhythm needs no translation to move your audience. Despite my vicarious relation to the craft, I’m convinced music holds some key to happiness. When a friend took me to see an act he manages in San Francisco, that key met tumblers and things started to click. With a surfeit of talent and energy and plenty of solos to go around, the Will Magid Four (see note 1) created a transformative, happy conversation between musicians and audience. I knew these guys had to play Cuba.

Will Magid: doing that voodoo that he does so well.

This I how I find myself waiting for eight strangers at Terminal 3. I had worked hard to square away details for their participation in Jazz Plaza 2012 – probably doubly so since I’ve never been on the organizational end of music before and this is Havana after all, where things are often needlessly, maddeningly difficult. To boot, only two of the eight had ever set foot in Cuba prior. The potential for disaster is high. Even as they do their first sound check, I’m still not sure it will come off – there are technical and electrical problems, the guitar player is laid flat by explosive diarrhea, and organizers are quietly voicing anxiety about the upcoming show to no one in particular.

But when the eight of them pile all their gear, luggage and laughter into the mini-van from the airport Cuban clown-car-style, I know my misgivings are misplaced. Grossly so: by the end of that first night, I’m marveling at how these folks roll with the Cuban flavor. When I lay out possibilities and options, they choose cajitas over paladars; 10 peso maquinas over hard currency taxis; Serrano over Cubita in the never-ending flow of espresso, and forgo sleep for fiestas. When Adam (AKA “Bass Face;” see note 2) sits down with cardboard, scissors, and glue to fashion sleeves for his CDs he’s giving away, I wonder what strange twist of fate dosed these folks with Cuban blood. It’s not only me: highballs of Havana Club in hand, they fill my apartment with such sweet sounds, my 8-year old neighbor sits rapt throughout the rehearsal whispering to me: ‘Conner! We don’t have music like this in Cuba!’ When I ask if he likes it he replies ‘Yesssssss!’ with a swivel of his hips.

Rehearsal in my living room, Will Magid 4, Havana

“I love this city,” Josue would say randomly and repeatedly over the course of his stay. He spoke for himself, me, the group and probably you, if you’re still reading this.

On the day of the first gig, we’re one credential short and every member of the group has spent their pre-dawn, post-party hours sprinting to the baño with crippling diarrhea, fever, and sleep-robbing nausea. Julie projectile vomited a couple of times and Ethan isn’t going anywhere. While this would be enough to sour the experience for most, I’m hunting down another credential, we’re taking Ethan’s guitar to sound check, and those still standing pop some ‘cork you up’ pills courtesy of my neighbor. The rest we tuck in with chamomile tea and crackers, hoping they’ll rally by nightfall. I counsel them to slow down a notch, go easy on the rum, and to eschew 5am batidos from now on. ‘No one can party ‘til pre-dawn for five days straight,’ I tell them (in this, I am proven quite wrong). With nothing left to do, we set out for the sound check.

We flag a maquina, load in the gear, and arrive at the Casa de Cultura a lo cubano. After some questions and clever resolving on the part of the venue’s crew – few here know how to hook up and mix a sequencer and Macbook with live players – the sound check goes off without a hitch. In the middle, Ruben, the artistic director, sidles up beside me and says ‘these guys are amazing.’ I agree, pointing out that not only are they stellar musicians but humans as well: Adam is donating his Fender Jazz Bass once the Festival is over and the group brought an entire suitcase of medicines and hard-to-get items to leave behind. 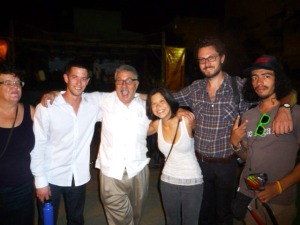 It doesn’t matter that the huge screen behind the stage says ‘Will Magio 4’ or that the crowd is thinner than expected. Terry would like a few more minutes to get his gig head on before getting behind his kit and I imagine Ethan is willing his sphincter into submission. In spite of it all, they exuded an equáname – a Cuban kind of go-with-the-flow – I very rarely see in North American visitors. Will leads the band in this and every sense, deftly maneuvering from sequencer to laptop to trumpet with magisterial ease and intent. Although their set is absurdly short, they win hearts and minds with their infectious energy and earnest words – in Spanish – for this opportunity to play in Cuba. 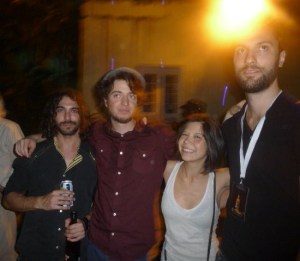 Bottle of Havana Club in hand (with a splash for los santos first), they join the crowd after their set to dance and swing to Wil Campa, the night’s headliner. I have never heard of this Pinar del Río artist and his Cuban music extravaganza, but from the looks of his late-model BMW, he is well known beyond these shores.

Already the WM4 rhythm section is making time with the ladies and a smiling Will is passing out discs. We dance and drink and soak up the Cubanía in a mutual love fest, while ‘El Loco,’ a friend from bike polo, gets it all on video. I feel my musical sixth sense being validated: I didn’t know why these cats had to come play Cuba, but knew magic might happen if they did.

El Loco and Terry, his ‘brother from another mother’

When we stop to care, it’s 1am – time to move on to the next fiesta. Little by little we move equipment, band, and ‘frens’ (see note 3) to the sidewalk and talk about where to go and what to do. Adam is the last to saunter out, his Bass Face, traded long ago in for his Cuban perma-grin.

“We ready?” he asks looking from face to beaming face, lingering on the torpid eyes of the mulata by his side.

“Where’s your bass?” someone asks.

He looks around expectantly. The group looks around hopefully, but I know. In the euphoria of their debut set, combined with the sassy, brassy salsa of Wil Campa, and the dancing frenzy fueled by 7-year old rum, ladrones had struck: some cheeky Cuban walked with that fretless Fender bass. I watch the Festival come to a screeching halt for the Will Magid 4.

“I don’t know where to get a bass on such short notice,” I say when someone suggests it.

“You’re not going to see that bass again,” one of the Insta-Groupies adds unhelpfully.

“Feo, feo, feo,” one of the Cuban musicians says shaking his head.

Ugly indeed and I feel completely responsible. I could and should have warned them of certain dangers and risks.

“Well, I made the donation,” Adam says, taking the theft in elegant stride. “And at least I know it will get to a musician who needs it.”

Just then, a chic woman appears speaking perfect English, asking what happened. At her elbow is a good-looking blond guy with ojos claros nodding along with the growing crowd of musicians as she explains Cuban realities and how robberies spike at the end of the year. Feeling responsible for the mierda that has gone down and remiss for not warning them, I wonder aloud how they’ll play their next gigs.

“I’ll loan you a bass,” ojos claros says with authority.

“This is Wil Campa. I’m his wife Tony,” the chic woman explains. “Here’s my cell – call when you’re ready to sound check tomorrow and we’ll bring it by.”

My heart swells and I swoon – once again – for this island where one minute you’re the victim of a robbery and the next the recipient of generosity and solidarity unparalled.

The show (and party) would indeed go on…

Stay tuned for Adventures of the Cuban Virgins Part II.

Notes
1. The line up stateside is actually the Will Magid Trio, but grew to four, plus four, for the trip south proving the Cuban mantra: the more the merrier.

2. By the end of the trip, most everyone, (again, getting their Cuban on), had a nickname: Terry is “Fancy LA,” Josue is the “Dairy Fairy,” Adam is “Bass Face/Rubiocito,” Ethan is “Emerson,” and Julie is….in solidarity with my rock ‘n roll sistah, I will not reveal the nickname pinned on her the last night.

3. A good band always attracts hangers-on and it doesn’t surprise me that within 48 hours, these handsome/talented/foreign musicians are surrounded by pretty/charming/bored Cubanas.