Havana, We Have a Problem: Stray Cats & Dogs

If you’ve been to Havana, you’ve seen them. The poor bitch in heat lying prostrate on the sidewalk trying – unsuccessfully – to prevent another macho from mounting her. Packs of roving cats scouring garbage night after night. Bony and mange-ridden, Havana’s strays have a hard row to hoe. Here, where food is rarely thrown out and the majority face daily pressures more urgent than a dumped or unwanted animal, street creatures have to be really scrappy to survive. They have to dodge the pet police, avoid getting poisoned (a shockingly, all-too-common practice here; when your dog barks too much or causes too much fuss, your neighbor just might feed her some meat mixed with crushed light bulbs or a fatal dose of BioRat, domestically-produced rat poison), and forage enough food to live another day.

Although Habana Vieja has a program for spaying, neutering, vaccinating and tagging strays, this is not the case throughout the rest of the city. Coincidence that the country’s #1 tourist destination is the only place with a functional animal protection policy? You be the judge. Animal rights activists here are trying to get a protection law considered – to present it to parliament, they have to collect 10,000 signatures from Cuban voters. And they almost made it; more than 8,000 people signed the petition to legislate spaying, neutering and vaccinating strays so they might be adopted. But the initiative went to shit when internal divisions (over money, I’m told, which isn’t at all hard to believe), split activists, leaving the petition en el aire, as we say here. Today, there are at least two groups still actively pushing for legislation: PAC (Protección de Animales de la Ciudad) and CEDA (Cubanos en Defensa de los Animales). There are also foreign associations – from Canada and Belgium for example – which help fund local animal protection efforts and come periodically to spay and neuter strays for free. These initiatives are admirable, but speaking from personal experience, wholly inadequate.

Toby. Linda. Tucho. Yoko. Luther. Belle. All of these cats and dogs are part of our family. Don’t worry. I haven’t turned into some crazy cat/dog lady; I don’t live with all these animals, but rather say ‘our family’ since here in Cuba we still speak more collectively than individually (let’s see how long that lasts; in Havana at least, the “me” mentality is starting to root). And each of these wonderful pets are rescues. At different times, under different circumstances in different parts of the city, they were saved from life on the mean city streets. 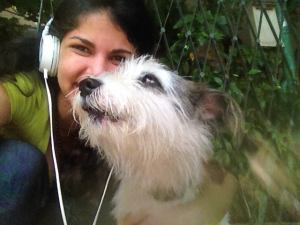 Toby wandered into Cuba Libro, dirty and sorry-looking, in 2014, soon after his young owner headed into military service, whereupon he cast Havana’s most beloved terrier mutt into the streets. I’ve got empathy for abandoned dogs, but as my father once wisely observed: ‘living with animals went out with Jesus.’ Besides, I live in a three-flight walk up – hardly ideal for a dog. So Toby lived in Cuba Libro’s garden, eating pizza and spaghetti until one fateful day when a violent tropical storm ripped open the Vedado skies, sending down thunderclaps and lightening, a hard pelting rain, and almonds from considerable height. And then my conscience kicked in: ‘that very cute dog is waiting out this storm alone. I better go check on him.’ When I got the locks off the gate and entered the garden, Toby was in the corner, soaked-to-the-bone and shivering, with a heart-broken look on his face. Did I have a choice? No folks, I did not. I plopped him into my backpack, strapped it to my chest and rode him home on my bike. Every day since, we’ve walked from our apartment to Cuba Libro, where he is more famous than me.

Tucho, the dog, like his friend Yoko, the cat (her partner, John, went the way of the actual Lennon, unfortunately), were found dumped in garbage cans, on the verge of starvation before my friends Lis and Alfredo took them in. Luther, meanwhile, was rescued outside the maternity hospital in Marianao. Lis and Alfredo discovered him when they came upon a gaggle of mischievous kids pelting the kitten with pebbles. Following a proper chewing out for their cruel behavior, my friends provided house and home for Luther (named for Dr King, who Cubans revere). This is one superior kitten who scales trees and walls like a superhero, can leap through windows better than a thief, and who already has his very own fan club with a President and card-carrying members, of which I am one. 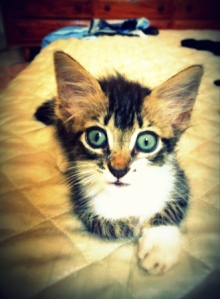 Belle, a gorgeous mutt with a good dose of German shepherd, was found abandoned in a coop, her fur so infested with chicken lice she couldn’t stand herself. Or even stand. Belle was taken in by my friends at the organic farm Finca Tungasuk where they tried all manner of non-chemical applications to cure her. Seems these were some hyper-resistant bichos: they finally resorted to spraying her with Lo Maté!, Cuban roach and bug killer. This is some strong stuff (manufactured by Cuban convicts, by the way). ‘If this doesn’t kill these lice, nothing will,’ they figured, letting the aerosol fly, taking great care to keep it from her head, mouth, eyes and ears. These are CUBAN bugs, remember. Rather than die, they hightailed it to Belle’s nose where they formed a writhing black mass like something from a sci-fi movie. Grossed out but determined, my friends eventually relieved Belle of her vermin, now contained on her nose, using a small brush. The good news is, today Belle is a beautiful, healthy, and happy farmhouse dog. In fact, she has just given birth to six gorgeous puppies sired by Huracán from the adjoining farm. 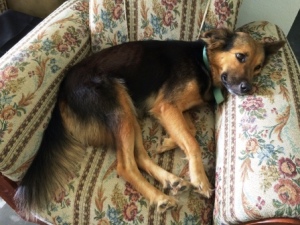 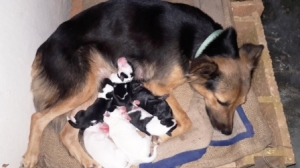 There’s Belle and then there’s Linda. Similar names, completely different experiences. Linda was found in San Miguel de Padrón at death’s door. This is no Cuban drama-rama or exaggeration: this one-year old mutt with baby doll eyes was lying on the sidewalk literally more skin-stretched-over-bones than dog, unable to lift her head. Seems her owners (strike that: abusers) had kept her on a choke chain so tight, a one inch band around her entire neck was raw and bloodied, with tendons exposed. Meanwhile, the ring on the chain had opened a nickel-sized hole in her throat so any sustenance proffered (she was beyond foraging for herself), went into her mouth and came out the hole.

Likely she had only a few days of life left when Alfredo and Lis (the same friends who took in Tucho, Yoko, and Luther) carried her home. What ensued was a modern fairy tale mixed with grisly, gory reality TV – a three hour surgical procedure to close her perforated pharynx (during which she flat lined twice), intravenous antibiotics multiple times a day, changing of bandages, intramuscular vitamin injections, and a special high protein diet, among other measures (yes, she was allowed to sleep in the bed!) to help nurse this helpless animal back to health. It put my friends in the poor house with all the transportation, medication and care required, but you should see this beautiful, grateful pooch just a week after her surgery. Hair growing back, eating like a horse, she’s constantly wagging her tail and setting her soft, gratitude-filled eyes on every human she comes across. And she and Toby have fallen in love. Exactly six days into her post-op recovery, she came into Cuba Libro bundled in a sheet carried by Lis. Toby immediately began licking Linda’s stitches and kissing her nose. He swiftly moved to sniffing her butt and before we could intervene, he mounted her. And she liked it. I swear they were both smiling. We’re now considering the possibility of mating them once she’s fully recovered. After Cuba’s cutest puppies are born, she’s getting spayed and he’s getting neutered.

Spaying and neutering: this is the #1 issue any Cuban animal protection campaign should attack head on. Where I come from, responsible pet owners spay and neuter. It’s hard to overstate how vehemently most Cubans reject this basic obligation – to the animals, to their neighbors, their city, and themselves. It’s part ignorance, part machismo (‘you can’t take away his manhood!’ I was told repeatedly when I announced I was going to neuter Toby. ‘I can’t? Watch me,’ I told dissenters). If more Cubans followed this standard practice, we wouldn’t have buried newborn kittens left in a box by the bodega last week.

Don’t like cats +/o dogs? Allergic? No problem. There are other animals left to the streets with alarming regularity – a duck took refuge in Cuba Libro’s garden a few days ago and Shiva, a tortoise, was rescued from a Centro Habana sidewalk by another friend a couple of years back. When she reached to scoop up the animal, she was chastised: ‘don’t touch that! It’s brujería!!’ (tortoises are used in various Afro-Cuban sacrificial ceremonies). She paid them no heed and today, Shiva is as big as a football and an integral part of her family. There are myriad reasons for leaving street animals to fend for themselves towards likely death. But there’s no excuse for putting a pet on the streets (a fairly common practice among Cubans preparing to emigrate) and one very good reason for rescuing them: it’s the right thing to do. 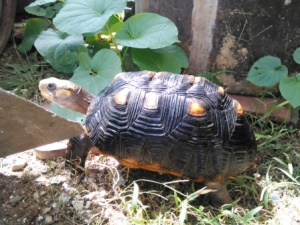 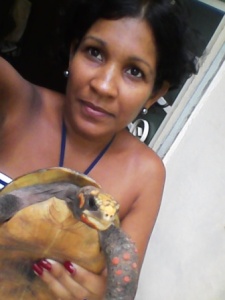 NB: Friends of Cuba Libro, the 501(c)3 I founded to fund projects of high community impact, is launching an initiative to help activists defray costs of animal rescue and raise funds for a proper animal shelter in Havana. Please drop a line if you’re interested in receiving more information.

12 responses to “Havana, We Have a Problem: Stray Cats & Dogs”